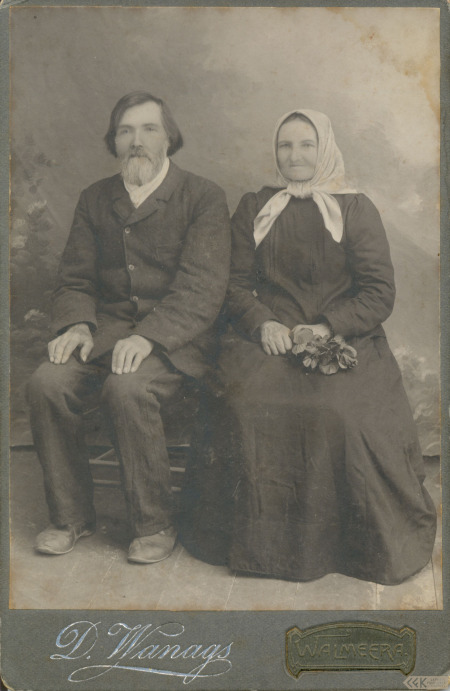 The life story of Latvian farmer, Ādams Purmalis (1846–1917), born in the mid-19th century, published in 2008 with commentary by Sanita Reinsone.

The descendants Ādams Purmalis referred to it variously, most often as Ādams’ story, but sometimes as the diary or simply the book. Thanks to the coincidence of certain favourable circumstances and the care of Purmalis relatives, the manuscript has been preserved in surprisingly good condition. It’s a thick volume of nearly 400 pages. The yellowed pages are carefully filled with writing on both sides. Inconspicuous miniature drawings appear from time to time throughout the text. The pages are numbered and page numbers 50, 100, 150, 200, etc. are adorned with a dotted circle. 17 pages of the manuscript are missing (pp. 304–321) as well as the very first page, but a copy of that has been preserved.

It is not entirely clear when the manuscript was written. It may cover a longer period of time at the beginning of the 20th century, but it is very likely that the autobiography was written according to previously written notes, or that some of the text was written much earlier but rewritten at the beginning of the 20th century. This is indicated by the uniform handwriting without significant breaks, and the precise dating of events. The date of writing, which has no direct connection with the storyline, is mentioned only in one place, at the bottom of page 68 as 27 May 1909, and it is likely that this is the time of writing.

At the beginning of the manuscript, the events of Ādams’ life are recorded in chronological order: birth, childhood memories, school days, etc. The sequential narration is interrupted from the year 1869, when Ādams reached the age of 23. What follows is divided into a number of chapters. The first of these is ‘Joku iedomu izdarījumi’ [Executed joke notions] describing five events that took place between 1868 and 1874, which seemed funny or unusual to the author. The first three are short descriptions of funny dress and peculiar sledge and wagon construction and driving to the church. In the fourth story, Purmalis writes about taking a walk in the fall of 1871 to fetch his violin, which had been given to old Cīrītis for repair. It is easy to trace his journey on a map due the careful description of his route. Further along in the text, especially in the chapters describing his courtship adventures, the road is of great importance and is described in detail—where he came from and where he went, what the road was like, what the weather was like, and how long it took him to travel. The fifth story launches into the theme he writes about most extensively, courtship and marrying. In this story, he and the boy on duty from “Mucenieki” go to visit the girls in the nearby “Lukstiņi” house.

This is followed by an extensive number of chapters entitles “The Beginnings of Marriage”. It is a narrative in 10 chapters about Purmalis’ experience of searching for a wife and marrying. He vividly describes the courtship and marriage practices in northern Vidzeme and depicts the active social lives of young people in the 19thcentury during weekends, evenings, and nights—not only in terms of courtship, but also wider gatherings of music and dancing, and walking from house to house.

In total, of the 400 pages of the manuscript, this part takes up more than a third of the text, dedicating only the last three pages to the description of the wedding.

The extensive description of marriageis followed by a final chapter “When I got married” in which Ādams focuses on the economic side of life and in places is reminiscent of an accounting document, mentioning how much he earned in cash or trade, the costs of house raising, etc. At the end of the story, when Purmalis is already an old man, his children raised and married, he writes about agricultural work. At the end, after the death of his son Kārlis, Purmalis thanks God for the long life that has been given, for his strength and health, and finishes his story with the words of the Psalm of David: Bless the Lord, O my soul: and all that is within me, bless his holy name.

In 2008, Ādams story was published in the LFK series, County Folklore: “The lives of habits and virtues of the inhabitants of Mazsalaca in Ā. Purmalis’ autobiography from the turn of the 20th century”, compiled and annotated by Sanita Reinsone (Zinātne publishing house).

The publication was reissued in 2011, and a dramatization of the story, “The Story of Adam’ was also staged at the Latvian National Theatre in the same year.